Thank you for celebrating the birthday of Sir Thomas Sean Connery on August 25th and your interest in Sean Connery Day. This is the 4th year for Sean Connery Day. Thanks to the support of fans like yourself, SCD continues to grow in popularity every year. For the first time, there will be a contest giveaway where one lucky fan will win a Sean Connery themed prize pack. 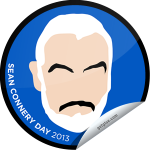 How to Enter: Sean Connery Day has partnered with the social TV platform GetGlue. On August 25th, fans who check-in to any Sean Connery film will earn the exclusive 2013 Sean Connery Day badge – which you can order for free as a sticker to show off your Sean Connery Day fandom! One lucky winner will be randomly selected to receive the prize pack. 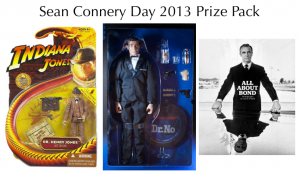 Not only can you participate by checking in and chatting on GetGlue to your favorite Connery films, you can also celebrate with fans from around the world in other ways. You could make videos to share on Instagram, Vine, and YouTube of your SCD movie watching parties or film your best Sean Connery impressions. After all, Sean Connery Day wouldn’t be complete without talking like him too!

Special thank you to the folks at GetGlue for partnering on this promotion and Amanda Roberts Design for creating the badge design.

The prize pack has an approximate value of $300 USD and was personally donated by Sean Connery Day founder Chad Elkins. GetGlue will facilitate the selection of the prize pack winner from their database of users who unlock the badge.